Satellite connectivity is entering a renaissance. Learn how it got here, who needs it, and how you'll be using it moving forward:

In 1962, U.S. satellite Telstar 1 connected the first satellite call, and the applications seemed endless. Soon, no span of air or sea would be insurmountable. Satellite calling began as a government and maritime technology, but came to market after the Commercial Space Launch Act of 1984 opened orbital space to private enterprises.

Satellite calling services were envisioned as a portable phone solution to rival nascent cellular technology, a way to connect the whole world in one brilliant stroke.

The story goes that in 1985 real estate broker Karen Bertiger experienced frustration in paradise: Karen couldn’t complete phone calls to her clients back in Arizona while vacationing in the Bahamas. She mentioned her troubles to her husband, Barry.

Barry Bertiger and his colleagues were engineers at telecom industry giant Motorola; they went on to conceptualize and propose the Iridium idea to their company. 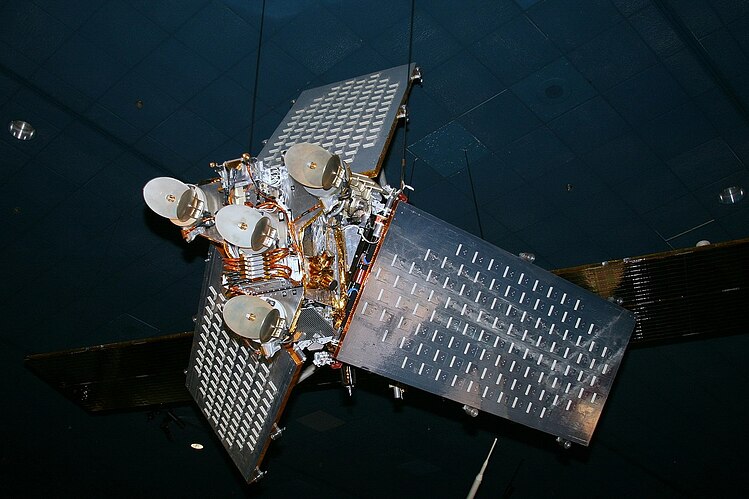 Above: The original Iridium satellites were equipped with four dual-blade pizza-cutters. (Credit: wikipedia.org)

Iridium would become the first Mobile Satellite Service (MSS). Its constellation would comprise 66 Low Earth Orbit (LEO) satellites circling Earth constantly in 100-minute orbits on six orbital planes. The idea was that any sky worldwide would always contain an Iridium satellite, so Iridium phones could call from Madagascar to Hawaii, to Antarctica, to Alaska, to the Bahamas, or to any U.S. suburb, if and whenever they wished, with just a clear view of the heavens.

Entering development in 1987, construction began on the actual Iridium satellites in 1993. The original fleet cost around $5-billion.

Globalstar, an aspiring MSS founded in 1991, followed with their own concept for 48 active LEO satellites—with 4 inactive spares—at a fleet cost of $1.8-billion.

The expected subscriber-base for a global calling service must have been massive when it was first conceived. By the time Iridium launched, however, cellular technology had taken leaps forward, and cellphones were sporting ever-sleeker designs and growing lists of features.

Iridium was only able to garner about 55,000 subscribers in 1998-99. The service and unwieldy handsets proved too costly for most, and cellular networks were providing coverage in the zones of highest impact. 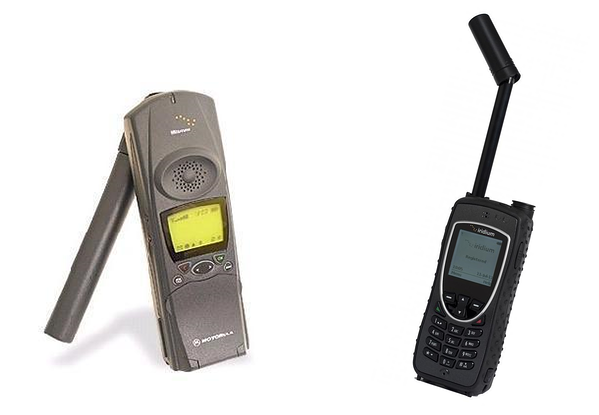 Above: One of the original 1998 Iridium satellite phones (left) beside a more rugged and compact 2011 device.

Not every MSS followed this model and met with financial disaster. Companies like Thuraya, founded in 1997, designed satellite calling services based on Geosynchronous Earth Orbit (GEO) satellites, and found early success.

The trick for them was their geostationary GEO satellites.

they maintain the same spot in the sky at all times, as seen from the ground. The advantages for an MSS are many, including broad

coverage and a functioning network with just a single satellite. (Credit: NASA)

LEO networks carry a punishing startup cost mostly because they require large numbers of satellites in the air before the network can effectively function anywhere.

With geostationary satellites, the service-provider can build a functional network one satellite at a time, mitigating investment risk and focusing on the most valuable populations first. Service can begin as soon as the ground infrastructure is in place and the first satellite is in position.

The elevation of GEO satellites also gives them a massive coverage footprint: the Thuraya network covers practically all of Asia, Australia, Africa, and Europe with just two satellites.

Right: This graphic shows the altitudes, orbital periods, and coverage footprints of various types of satellites; compare the footprints of LEO to GEO satellites and you can intuit why a LEO network requires so many more satellites. [1]

Those first LEO networks would be bought by new investors, Iridium for $35-million, Globalstar for $43-million. They would go on to reduce operational costs and begin turning profits for their new owners by 2005.

Regardless how they succeeded, satellite phones now enjoy modest but sustainable sales figures, boosted where and when disasters occur. The question is how much longer will this be the case?

Over the past eleven years, smartphones have become commonplace, and the focus of mobile providers has shifted increasingly towards providing internet services to mobile subscribers.

Teledesic was the first satellite venture focused on global broadband internet, and it began all the way back in 1990. Their plan called for hundreds of LEO satellites, costing upwards of $10-billion. In 2003, the project was abandoned after it was concluded demand would be insufficient to make the network viable. The struggles of Iridium and Globalstar likely were not encouraging to investors.

tech-titans Bill Gates and Craig McCaw, and high-clout companies like Boeing and Motorola. [2][3]

The truth is that all the LEO satellite networks were premature, considering the expense of satellite creation and launch at the time. On top of that, wireless internet technology was still underdeveloped: even if Teledesic had launched successfully, the data-capabilities of their satellites would’ve been grossly outdated within a few years of their service taking off.

That's not the case today. While ground-based internet will always have the advantage of quicker and easier rollout, we're no longer starved for connection speed as we once were. It's likely an internet satellite launched today would still provide satisfactory data speeds ten years from now, with software-only upgrades improving service over time.

Currently, ViaSat and Hughes-Net are supplying high-speed internet to rural areas through satellite connections. To get internet on the move while outside of cellular coverage zones, a breed of satellite peripherals has been steadily growing. 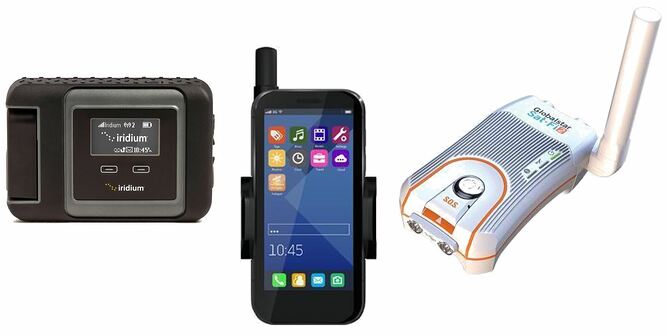 Above, from Left to Right: Smartphone users are beginning to access satellite calling and data with peripherals such as the Iridium GO!,

Iridium GO! was one of the first entrants to offer users satellite calling via their own smartphones, but the original Iridium satellites only manage 2.4 kbps of data, and the Iridium Go! does not support smartphone apps or browsing. Thuraya’s Satsleeve+ is a smartphone attachment with a 60 kbps satellite data connection along with calling, text, and SOS. Globalstar's low-priced SatFi 2 was released in 2018 and enables multiple users to perform satellite calling and text as well as browsing and social media at up to 72 kbps.

When Carnegie Technologies’s own SatBridge becomes available in 2019, buyers will have a portable multi-user hotspot to call, text, and access high-speed satellite data on their smart devices at 400+ kbps, with no limits on apps, features, or web-browsing.

As the definition of satellite connectivity shifts to align with a more data-focused world, satellite technology will continue to grow more valuable. Products like the SatBridge are the next wave. 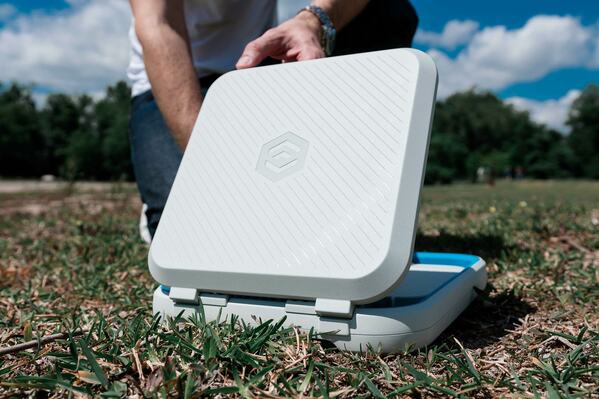 Above: The Carnegie Technologies SatBridge hotspot will bring off-grid flexibility to business and government field workers, disaster recovery efforts, as well as Film, TV, and Journalism in remote and rural locations. Always-available satellite data will also provide new levels of freedom to adventurists, and peace of mind to those keeping emergency-prepared homes.

Satellite communications have come a long way since the first satellite call in 1962; with satellite data tools coming into our hands and expanding our connected possibilities, it's an exciting time to watch the satellite industry as it evolves over the coming decade.