How Did Satellite Technology Take Off?

Read about the growth of satellite technology:

Observing Jupiter’s moons, Astronomer Johannes Kepler dubbed them 'satellites' in 1610. To that point, the word meant a hanger-on or subservient follower. Kepler's application therefore seems poetic, characterizing the orbit of a small moon caught in the sway of a vast planet. His use of the word would eventually overshadow the original.

The concept of an artificial satellite—distinct from natural satellites like moons or asteroids—first appeared in fiction in Edward Everett Hale's 1869 serial, The Brick Moon. The story centers on the construction and launch of a second orbital moon (yes, made of brick) to act as a navigational aid for sailors. 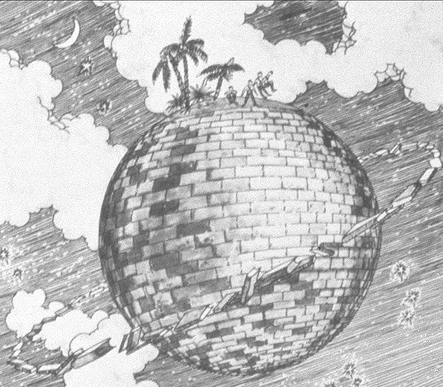 Above: Hale's Brick Moon. The story is by turns prescient and fantastical, but is significant as a kind of timestamped

intersection of our early theoretical knowledge and imaginative ability to place ourselves in orbit. (Credit: NASA)

Russian schoolteacher and space-enthusiast Konstantin E. Tsiolkovskiy was the first to provide accurate calculations for effectively launching spacecraft with rockets. His 1903 article, "Exploration of Cosmic Space by Means of Reaction Devices," would loom particularly large in the advances of rocketry.

By 1945, the sciences that would make artificial satellites a realistic possibility were converging. Author Arthur C. Clarke outlined in Wireless World that year how geostationary satellites would one day become the optimal tool for global broadcasting and communications.

Above: From Clarke's "Extra-Terrestrial Relays" (Wireless World 1945). This figure illustrates how three geostationary

satellites—marked here as stations 1, 2, and 3—would compose a system for comprehensive global broadcast coverage. [1]

Launched October 4, 1957, Sputnik was the first artificial satellite to successfully achieve orbit. The Soviet satellite Sputnik rang in the Space Age with a single, repeating pulse (listen), played at two frequencies to be picked up by any radio-wielding Earthling.

Sputnik was designed to be simple and lightweight in order to speed its launch and stay ahead of the first U.S. satellite, Explorer 1, which targeted 1957 as its launch date (it ended up launching January of 1958)[2]. Sputnik's success spurred the U.S. government to establish NASA and commit more resources than ever to satellite and space-related technologies.

In December of 1958, the U.S. launched Project SCORE. The SCORE satellite performed the first test of communications relays in space, delivering a prerecorded Christmas greeting to Earth from U.S. President Eisenhower. In 1960 came TIROS-1, the first successful weather satellite (its 1959 predecessor, Vanguard 2, achieved orbit but failed to produce good data) capable of sending infrared images of Earth’s cloud cover to ground. Ten TIROS satellites would be launched by the end of 1965. 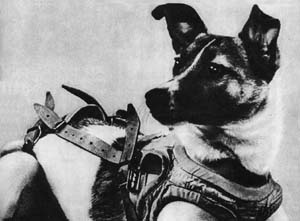 Above: The first living being in orbit went up aboard Sputnik II two months after

the first Sputnik; the intrepid mutt, Laika, died a small number of hours after launch,

but she remains an international hero (you might know her from this Arcade Fire song).

Ascending to orbit on July 10th, 1962, U.S. satellite Telstar 1 is an iconic figure in the satellite story. Not only did it break ground in engineering and satellite-capability, it provoked powerful enthusiasm in the public. It connected the first satellite call the day it launched, and would go on to relay the first official live transatlantic television broadcast two weeks later.

According to the Smithsonian Institute, "From the beginnings of the design process through its launch, Telstar was meant to push back against the threat of nuclear war and demonstrate the United States’ willingness to share its civilian space efforts with the public."[3] Telstar became a star in pop culture, inspiring the only purely instrumental song in history to reach #1 on both the U.S. and UK weekly charts (listen)[4].

Above, Right: Did you know the iconic black and white adidas soccer ball was named after the Telstar satellite? You can see why...

It didn't take long for satellites to become useful elements of our technological ecosystems. The first truly geostationary communications satellite, Syncom 3, would provide live coverage of the 1964 Olympics in Tokyo to viewers in the United States before serving the Department of Defense during the Vietnam War.

Satellite television underwent refinement over the next decade, and was commercialized in 1976 in the U.S., kicking off with well known cable television companies like HBO (Home Box Office) and TBS (Turner Broadcasting System). PBS (Public Broadcasting Service) would be distributed through satellite starting in 1978. The satellite television industry maintains a robust subscriber base, though television subscriptions are down across the board with the rise of streaming content.[5] One thing to watch is whether satellite data eventually takes over the market of satellite TV.

The meteorological application of satellite technology is arguably its most significant. Six Nimbus satellites were successfully launched from 1964 to 1978, and these provided observational photography of the Earth until the early 1990s. The TIROS and Nimbus programs preceded current breeds of weather satellites, the earliest of which began launching in the mid to late 1970s. These include polar-orbiting operational environmental satellites (POES), and geostationary operational environmental satellites (GOES). As of 2016, GOES satellites are in their third generation, and GOES-17 launched in March of 2018.[6]

This means the satellite will always occupy the same spot in the sky, as seen from the ground. (Credit: NASA)

GPS is another impactful satellite technology we use daily. Our GPS constellation operates in medium earth orbit, with an approximately 12-hour orbital period. The U.S. Government-run Global Positioning System was born in 1978 with the first NAVSTAR satellite—it would not be fully operational until an entire 24-satellite constellation was in place in 1993. GPS was developed by the Department of Defense, inspired by Navy tests that showed submarines could calculate their locations based on 'Doppler Effect' readings from satellites passing overhead.[7] GPS will continue to be relevant for the foreseeable future, especially with the advent of IoT (Internet of Things) which leverages GPS data to provide tracking features and location-based analytics.

Though we certainly haven't covered everything, this overview of satellite history hopefully helps solidify your foundational knowledge of satellite technology, and gives you some leads on what to look up next. You'll find that most of the stories discussed here are worth a more nuanced look.

The utility of satellites is only growing with time. What we're not discussing here is the Mobile Satellite Services (MSS), or the future of satellite connectivity. We've got a follow-up post coming that will center on that very subject, so we hope to see you back for that.

Satellites will evolve new capabilities and higher levels of performance, and we're excited to keep interfacing with those developments moving forward. Visit our website to learn about our satellite products that will help users connect in the future.